A bold statement of what’s great in the American culinary landscape circa 2020.

Long-time readers of this dessert blog will know that we have moaned on quite a few previous occasions that many a restaurant in New York, overwhelmingly fail..and fail tremendously… at executing memorable dessert epilogues to an otherwise wonderful meal.  An uninspired plate of cookies, a stale slice of cake or a careless plop of ice cream does not constitute a proper dessert in a restaurant.  It’s a tragedy that leaves these Dessert Correspondents especially, in a bamboozled state.  Why the anti-climax?!  😦  It has thus been our mission to seek out the New York restaurants who do afford more considered attention to the dessert menu.  In the lobby of a Financial District building, there is a place with a curious name – Crown Shy.  Here, the music errs on the border of nightclub territory, while the decor is decidedly retro-masculine in several shades of brown and black leather.  This is where an assortment of on-duty Wall Street suits and off-duty bros in plaid visit for something less predictable than the many steakhouses littering the windy streets of the Financial District, and something a little more classy than the Stone Street area.  But, you will also see more casually-dressed creatives too, here.

We have visited several times since it opened last year, for both lunch and dinner, for dining with work colleagues to mid-week escapes from work.  And over several visits, we haven’t yet encountered a dish that we wouldn’t order again.  Say yes to the free, toasty-warm bread that arrives at your table, yes to the cigars of gruyere fritters, yes to the luscious caramelle pasta, yes to the East-meets-West fusion-y fluke crudo, a hundred times yes to the charred octopus morsels.  And save room for the desserts.

Crown Shy could have adopted the same route as so many other restaurants in NYC do when it comes to the dessert menu.  They could have carelessly scooped up a trio of ice cream and dumped it in a crucible, they could have sliced a pre-made cake or tart, sprinkled some crackly bits and called that tragedy a “dessert.”  But, they didn’t.  For those yearning for a rich dessert, Crown Shy has you covered.  A smidgen softer in texture than its original English ancestor, Crown Shy’s “Sticky Toffee Pudding” ($18) serves two according to the menu.  It really could serve four.  It’s accompanied by an orb of tingling green apple sorbet, overlaid with cream.  We find the latter cream component unnecessary, and somewhat detracting, you could scoop it aside.  There’s also the “Chocolate Tart” ($15) where you get the stracciatella tones of chocolate and milky vanilla (with slight coffee tones), and contrasting textures of crunch and cream.

As for the lighter desserts, we had a “Pineapple Pavlova” ($13) in the summer, and the “Honey Icebox Cake” ($15) in the winter.  The latter was akin to a medovnik cake, and is a must-order.  There’s also three varieties of ice cream sundaes, of which you may have read volumes of praise levelled on these by various paper media critics.  We personally think, they are a little over-hyped.  The “Satsuma Orange” ($10) is refreshing, slightly tangier than your childhood creamsicle, but it’s still icecream after all…albeit dressed up with a little more effort than most other restaurants might undertake, with shards of honey comb and a photogenic toasted marshmallow hat. 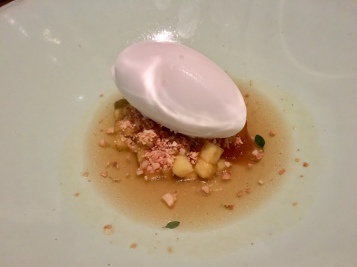 Crown Shy is such a misleading name.  Rather, the restaurant is a bold statement of what’s great in the American culinary landscape circa 2020.  Begone the stuffy, sauce-and-butter-laden chunks of meats and steamed vegetables and limp salad bowls of the last half-a-century, begone the molecular gastronomy of the early naughts, and welcome “comfort food” re-imagined for the post-GFC era…to remind us that even if the U.S. has an Oompa Loompa whose nepotism, cronyism and complete disregard for the rule of law arguably surpasses even that of so-called non-First World countries’ presidents, at least such craziness has not (yet) infiltrated the food landscape.  And one spoon of Crown Shy’s Sticky Toffee Pudding or Honey Icebox Cake, it’s a promise of the evasive American dream.