A Guide to Christmas Dessert Bargains in Melbourne

Christian, commercialised, crazy, comatosed Christmas. Pardon the pun, all these words ring the bell when it comes to describing the Christmas season. However, they don’t necessarily apply in full degrees. That is, you don’t need to be Christian, expend loads of cash, or compete to be the best present-giver or the most grotesque example of gluttony to enjoy this end-of-year festivity. Your dedicated Dessert Correspondents hereby present five sweet and simple ways to have or give a little treat this Christmas without becoming crazy. Enjoy!

Little Cupcakes is MoMo & Coco’s official favourite long-standing cupcake specialty store in Melbourne — moist richly flavoured morsels with just the correct cake icing ratio. A simple thing that so many other cupcake imposters fail! This Christmas, look out especially for Mr Snowman, a lemonade meringue blob squatting on a striated green, lemon cupcake, and Rudolph Reindeer, his thorny head beaming from a vanilla base. There’s also a green tea cupcake topped with a squiggle Christmas tree that we have seen and sampled but we much prefer classically flavoured cupcakes. 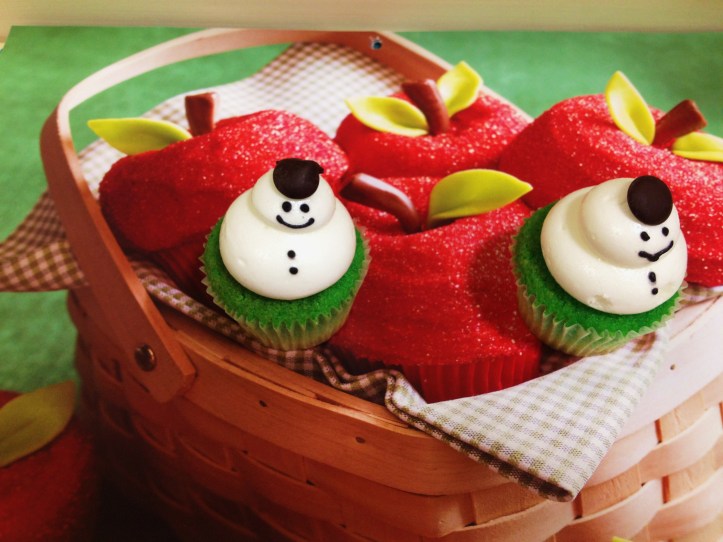 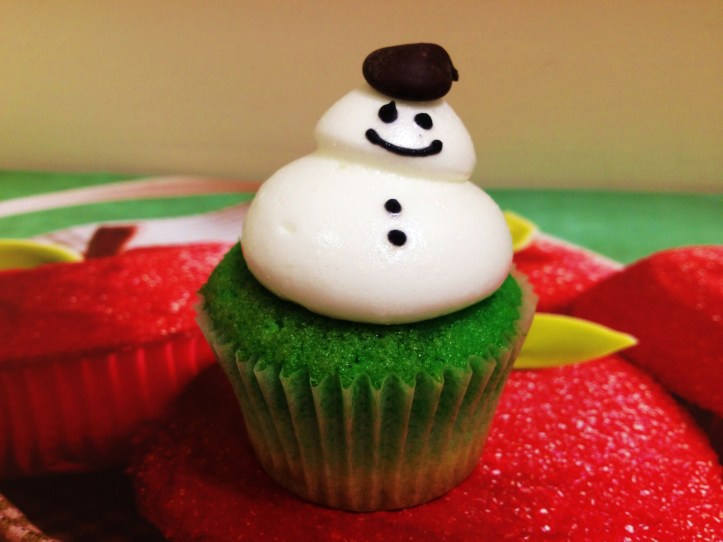 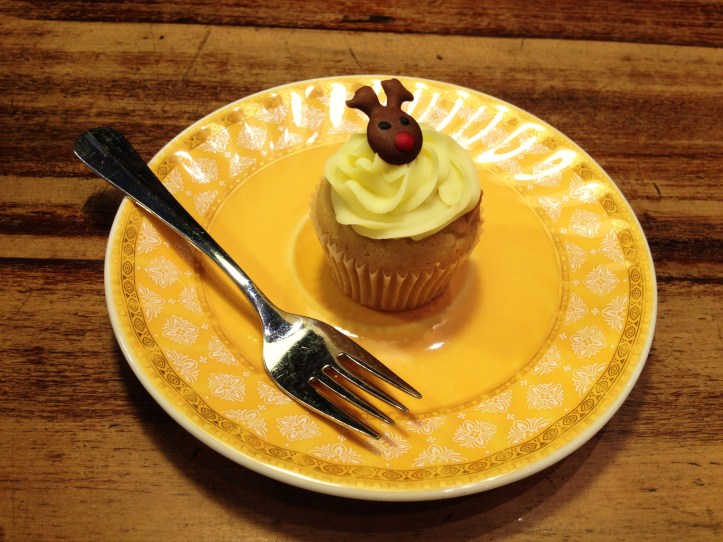 From 2010 to 2011 Melbourne became manic for macarons. Reflecting the very eminent economic depression notwithstanding all that assurances of good times by a government stupid enough not to set up a sovereign wealth fund and management teams engaging in inspirational talks with one wave of the hand and signing redundancies with the other, Melbourne’s love for these round discs have arguably, somewhat cooled in 2012. But sweeten your life with two bulbous gobstoppers from Macaron de Paris — an excellent Candy Cane Macaron with a very thick creamy centre and a less successful albeit more colourful Pistachio Noel Macaron with a very soft pistachio tone. From Cacao, there’s one very special Christmas Macaron – a green and scarlet half sandwiching a slightly drippy but deeply flavored spice ganache — almost a fruit mince flavour. For a more detailed review of Macaron de Paris’ macarons, see here, and for Cacao’s macarons, see here. 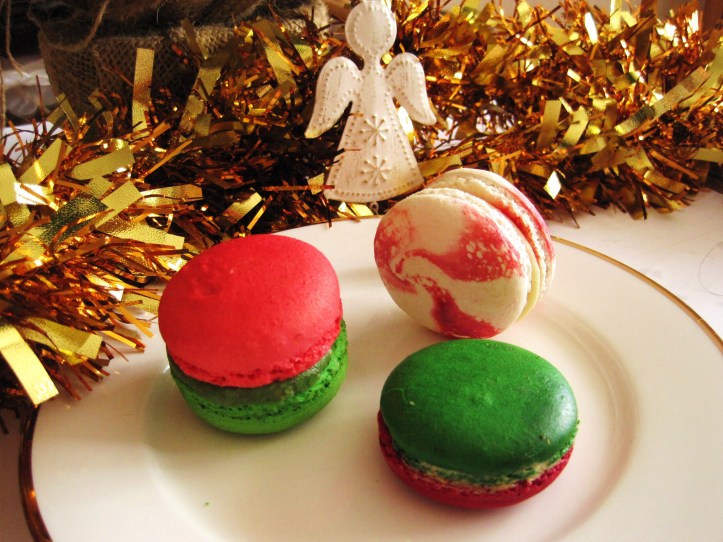 Once, the mission of a god-fearing Christian would be to evangelize, aka civilize, all those eastern barbarians in the unknown Orient. Such a Christian would think it beneath him to partake in local cuisine. Keeping within one’s world means never experiencing another. What a pity! Straddling the boundary between tradition and modernity, Asian and Western, the rather unique Bao Now offers Chinese steamed buns embracing the flavours of the world. And for this Christmas, do try the very excellent fruit mince bao. The small fistful is a little denser than the type you would ordinarily eat at yum cha, but it balances well against the richer filling of a creamy fruit peel flavoured paste. There are also little nuggets of raisins within too. A great, conversation-starter, and an alternative to shortcrust fruit mince pastry tarts at the upcoming Christmas lunch or dinner. For a more detailed review on baos from Bao Now, see here. 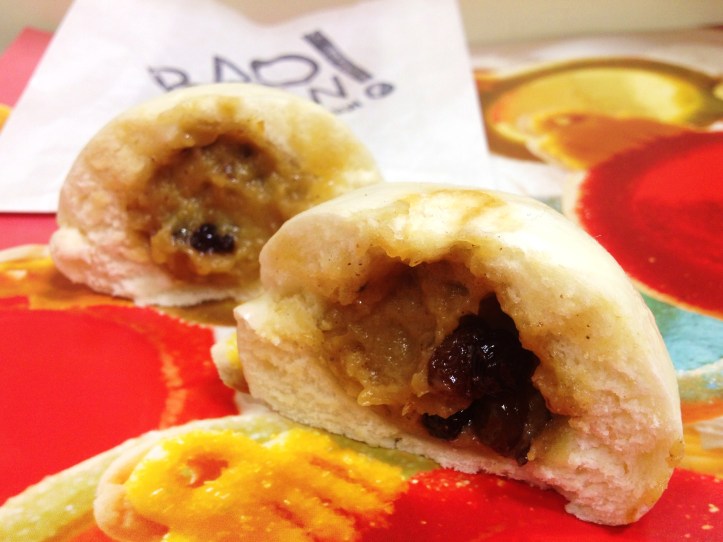 Give credit to the globalised wonder of Krispy Kreme to update its doughnut range with two Christmas edibles guaranteed to give you a lipid-filled doughnut ring around your mid-section. Oh well, once in a year. Sing a carol to the Christmas Tree, a tree-shaped doughnut glazed with a sugary green hard icing, bauble-like sprinkles and a whole Kit Kat chocolate bar unceremoniously shoved up its posterior. Or bypass the terrible boozy density of a Christmas pudding for a Pudding Doughnut with a solidified chocolate icing cover, an inside of custard slightly spiced with cinnamon, and embellished with a sprig of mint leaves jubes and a red lolly ball. 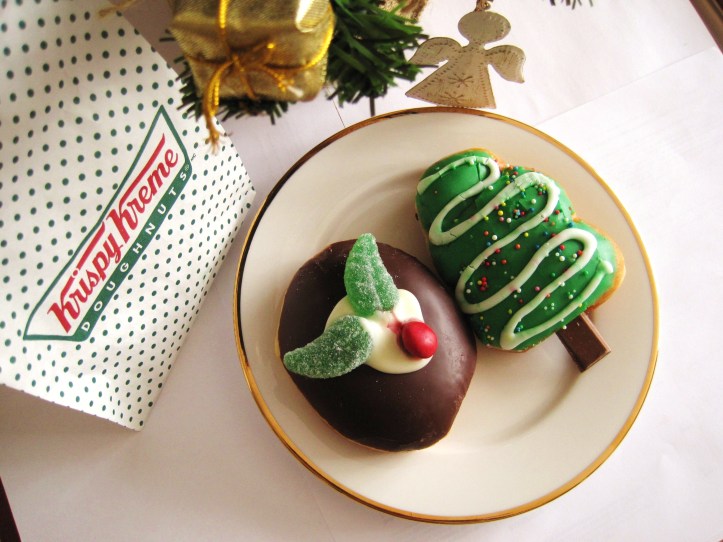 Haigh’s was probably the first chocolatier in Melbourne — the irony is that this South Australian migrant seems to be more commercial than artisan now what with the advent of other chocolatiers, and it also has become by virtue of its predominant CBD focus, the province of tourists rather than locals nowadays. No matter, you cannot go past its Australiana-themed chocolate bites (eg lemon myrtle, wattle seed, eucalyptus). Do also try its seasonal festive bites — the bold booze ball of the pudding (a very dark chocolate encasing a very dense, very rich brandy-flavoured ganache); the Marzipan Orange Chocolate layered with grainy almond marzipan and yielding whispery citrus tones; and the rather chewy, somewhat absent Gingerbread Nougat. The first above-mentioned is the more memorable. Watch out as these are priced by the weight rather than by piece. 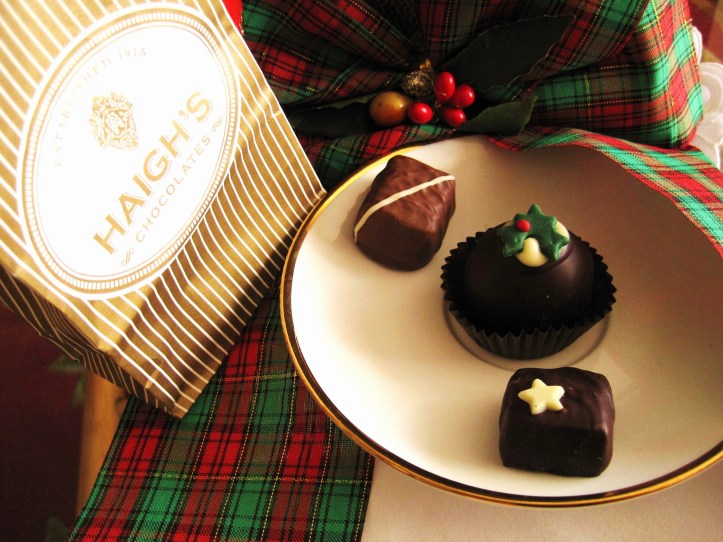 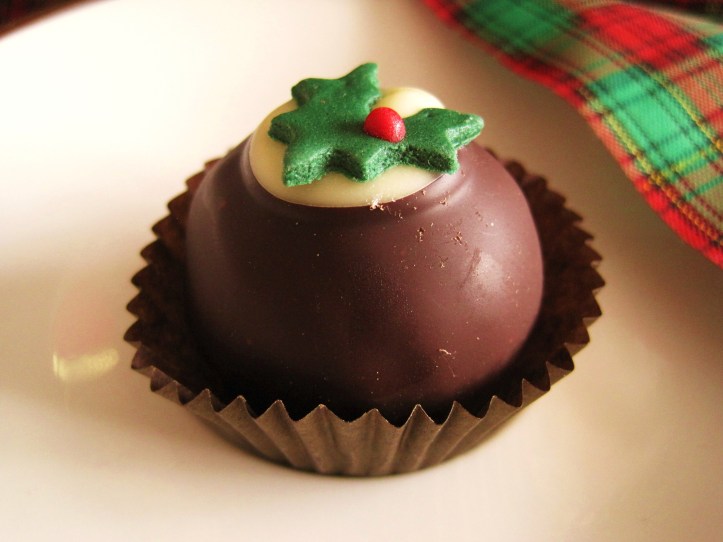 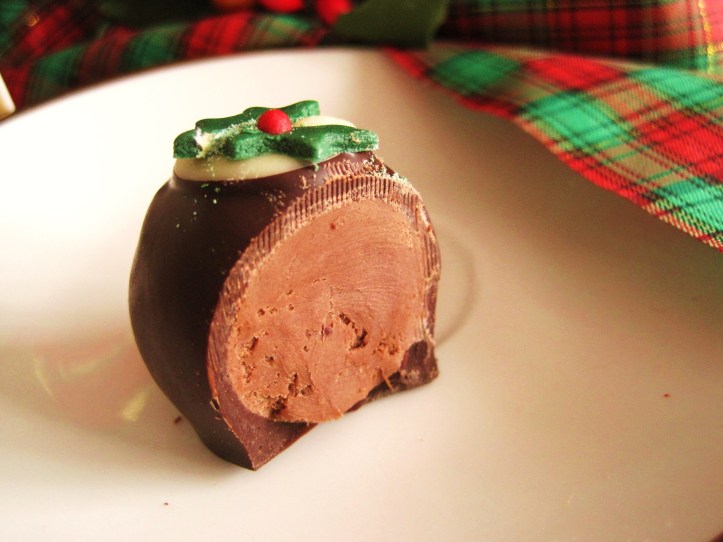 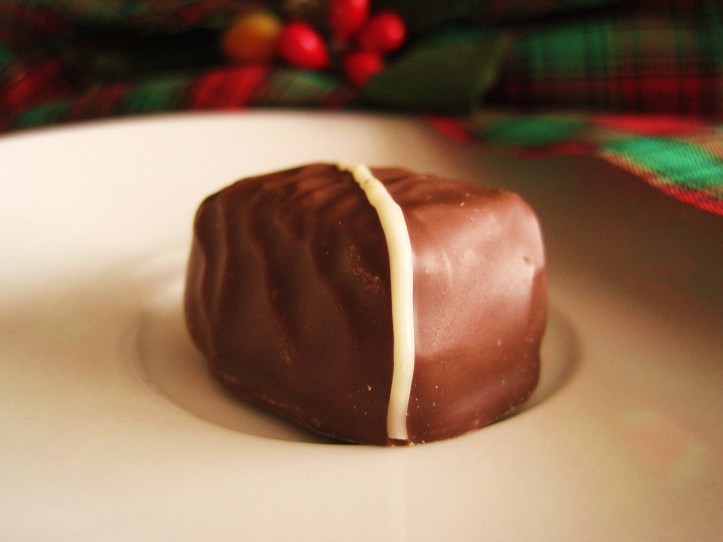 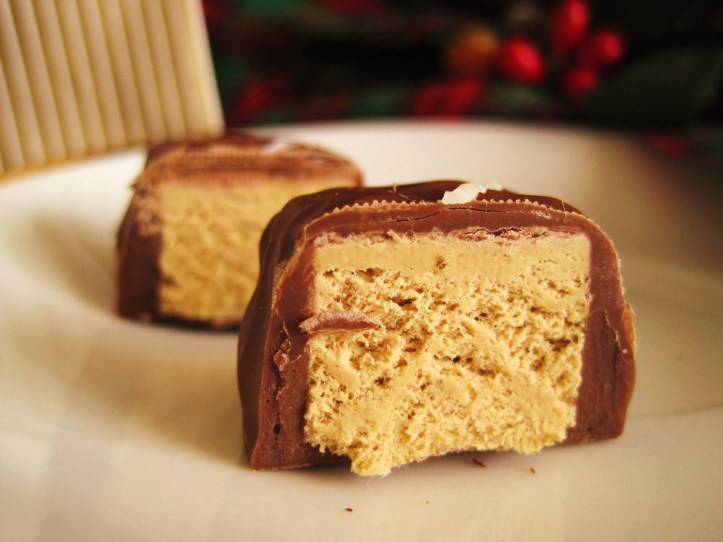 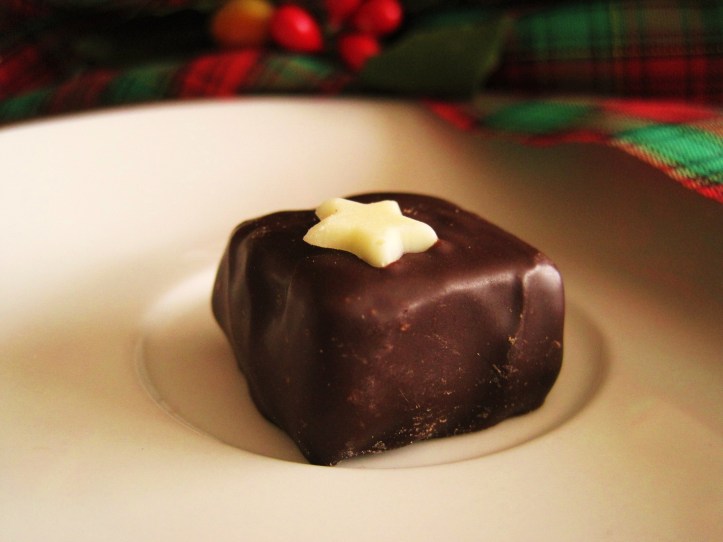 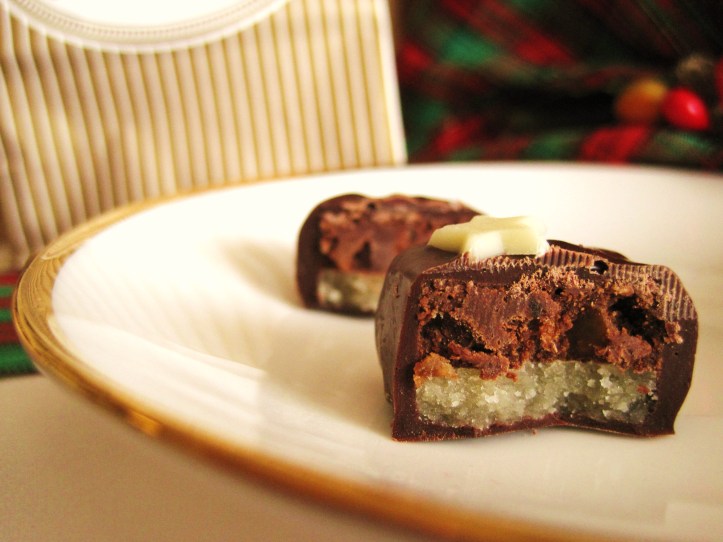 Like Christmas in the 21st century, Suga is tradition renewed. White minimalist shops furnished with glass jars and plastic bags of boiled lollies gleaming with the kaleidoscope colouring of stained glass. It is constantly crowded with people enchanted by its onsite candy-making demonstrations (pulling, stretching, beating, rolling sugar mixes — a form of torture to candy in any other language). For Christmas 2012, we would be a happy child-adults if we see one of these psychedelic lollipops popping out of our stockings (not our sheer work pantyhoses, mind you Mr Santa!) on Christmas morning. A small size should suffice, available in lick-able flavours of apple, peppermint, watermelon and passionfruit. Decisions, decisions, decisions. 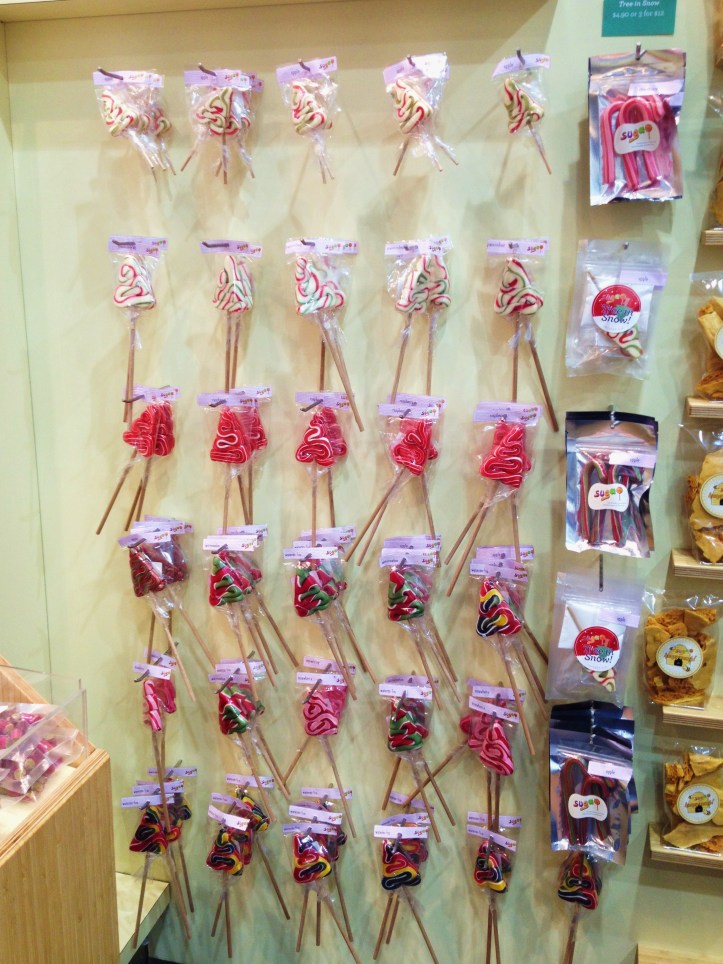