A Guide to Lemon Tarts in Melbourne

This special review is dedicated to chronicling a selection of perhaps the most exquisite lemon tarts in Melbourne, assessed by the four standards of overall appearance, taste and texture of curd, taste and texture of pastry, setting and price. In ascending order of irresistibility, MoMo & Coco give you our opinion of….

For a few gold coins, I go

Almost French is almost French because it is snuggled in a corner block in Richmond’s traditionally yuppie, Greek precinct; the staff are Vietnamese-Australians and a number of the cakes veer into English country house rather than truly evoking Parisian boulevard cafe. But dear readers, geographic semantics means so little in a country that is neither European nor Asian, and when a cafe-bakery offers some of the most competitively-priced cakes and pastries in Melbourne! Let us not digress. Spot the Lemon Brulee Tart, order it, eat it. Overlook the somewhat under-baked misfortune of the pastry base and the occasionally unstable curd. Stroke the curve of your spoon over a surface scalded to a glossy burnt creme brulee-esque finish minus a toffee layer. Scoop a mouthful of moderately sour tart with a tone of burnt caramel. Simple deliciousness for a few gold coins. Can you resist? 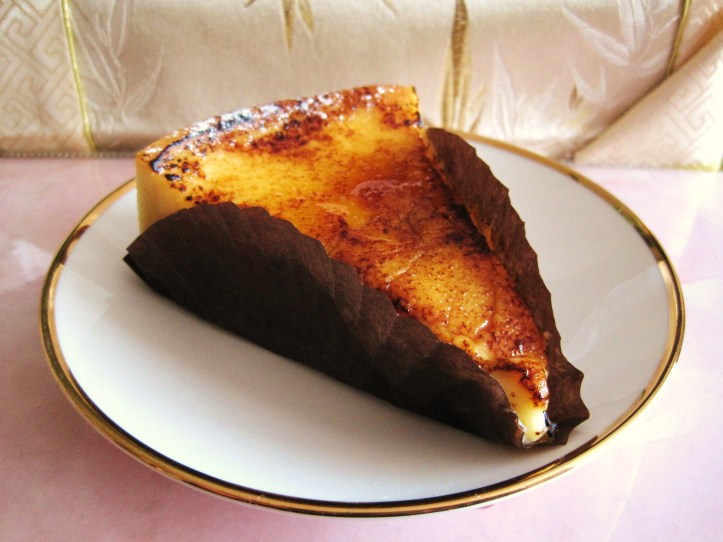 The true Melbourne local knows that the best eating and drinking places are not located on the main streets. Backstreet, basements, laneways, rooftops — it will be the difficult-to-pinpoint-on-a-map (paper or iPhone) places that are the most excellent. Tucked underneath at the backside of a steel and glass office block, the tiny Le Petit Gateau is well-known for creating beautiful works of cake artistry, including our favourite passionfruit praline brownie cake. But dear readers, the Tarte au Citron is worth trying too. Its concaved pastry base is somewhat overly crunchy, but the restrained curd saves the tart, developing in the middle and lingering only for a while. It’s spotted with a white puff of cream and a square of chocolate too. Ideal for sweet-tooths who prefer a mostly sweet lemon tart with a gentle tang.

When all that jazz happens in the north

Clinging skinny pants, a penchant for maroon, mustard, forest green colours. Faces adorned with bouffant hair or hair quiffs, glories of facial hair and cheek-grazing tortoiseshell glasses. Free love but not free trade, entirely organic, au naturel, y’ah know it darlings. Are we in the 70s? No, Brunswick, Melbourne circa 2012. Also known as bastion of the hipsters, bohemians and greenies. Dining at Albert St is dining on a Brunswick street. In most ways, an appealing microcosmic dining experience. You will eat and drink alongside Generation Y and Generation X and Generation pre-XY hipsters. The food is traditional, flavoured by the countries of the waves of migrants who once ambled in Brunswick — France, Italy, Greece and the borders of the Middle East. Delivered by service staff with the same nonchalance of the 70s which will likely give you “chills, they’re multiplying, I’m losing control, ’cause the [sour service] you are supplying…” but then that Meyer Lemon Tart….it’s e-l-e-c-t-r-i-f-y-i-n-g! A pastry base with a lovely, unmistakable buttery taste. It’s solid, not soggy, not overly crusty nor crumble. On two samplings though, we had to give the rounded area a few jabs to cut through the base. Now consider the lemon curd component. A serious hit of sourness explodes on the first taste bud and lasts as it suavely slides all the way down your tongue and onwards. Be warned, this is the lemon tart for only the most serious lemon tart aficionados. We found its ricocheting flavours close to car-battery acid levels. See our previous review here.

Perhaps the greatest global challenge in the 21st century is not the intangibility of climate change, but the tangible downfall of so many small businesses deserted by those lured away by the egoism of so-called celebrity chefs or trendy interior decors. It is with this in mind that one can better appreciate long-standing, no-hype suburban treasures such as Browns’ Bakery. The pastry base of a Browns’ lemon tart is solid without crumbling, with its outer crust being harder than its base crust. Occasionally, it seems slightly over-baked to slight dryness. The curd is thicker, creamier than most tarts we have sampled, but when held against the light, still holds a beautiful yellow opaqueness with a hint of translucency. The flavour is bold from just before the middle of one’s sampling. However, it does not reach teeth-enamel eroding acid levels (unlike at Albert St), and therefore has wider inter-generational appeal. The one aspect of Browns’ that we dislike is the thick icing sugar layer, which we usually scrap off before consumption. It tastes so decadent, yet looks so simple — are you tempted to bring it to your next dinner party as an example of your baking prowess?

Have it in Wonderland

Deconstructed desserts usually take up the stomach space of a 50 cent coin for the price of a $50 note. In a subterranean setting a world away from this world, Hare & Grace offers modern cuisine a world away from the highway robbery committed by many modern restaurants. It savouries are sometimes a little too “curiouser curiouser” and it is not uncommon that a dish can be as transformational as a “drink me” potion. However, this avant-garde edge seems to have softened on a recent visit. In any case,  desserts at Hare & Grace are the talented, confident expression of a beautiful mind. Hare & Grace’s Broken Promises Lemon Tart is every promise of a lemon tart fulfilled. A lemon tart bereft of a shortcrust pastry enclosure sits like a pretty yellow boulder in a white plate strewn with delicate pansies. Strangely, one does not miss the absence of the pastry base — it features as a trail of biscuit crumble surrounding the tart itself. The smooth curd develops quickly in intensity, enduring for some time on the tongue as a soft rather than acerbic lemon-y memory. See our previous review here.

How do you like it? Well-heeled, well-connected but utterly condescending Darcy, or Orville? Grouchy and blunt with a dark past Rochester, or Thornton? Loyal but long suffering Heathcliffe, or Ariza? Wildly sensual but unpredictable and uncommitted Butler, or Vronsky? They are all yours, we have Mr Hive. Relatively hidden away, but exceedingly warm once you get to know him. Handsomely fitted-out, but neither pretentious nor inaccessible. He could lure you with a fabulous cocktail at a moody bar, or linger with you over an elegant Modern Australian-European meal. But my dears, frankly we don’t give a damn unless he shows us the way to the desserts. And my god, he is a dessert Olympiad decorated with a lion’s share of gold medals. He could offer you the magical tropical island basil white chocolate mousse bowl, or the lascivious chocolate bar, or engage in pre-pillow talk over the pillowy souffle, but he is the sir after our own hearts if the simply-named Lemon Tart is ordered. The pastry base is thin, deeply-tanned and of a biscuity-taste. Unlike Browns’ and Albert St’s, Mr Hive has no overly crusty bits, he yields at the slice of your fork/spoon with no risk of deserting your plate. The only possible down-note is a slight absence of buttery taste in the pastry. The curd is soft yet stable, creamy yet light, full-flavoured but not to the extent of triggering warfare your stomach acid levels. No superfluous icing sugar dusting here (unlike Brown’s or Albert St’s), but rather, a laser-thin toffee finish (as contemplated but unexecuted at Almost French). He is the one. See our previous review here. 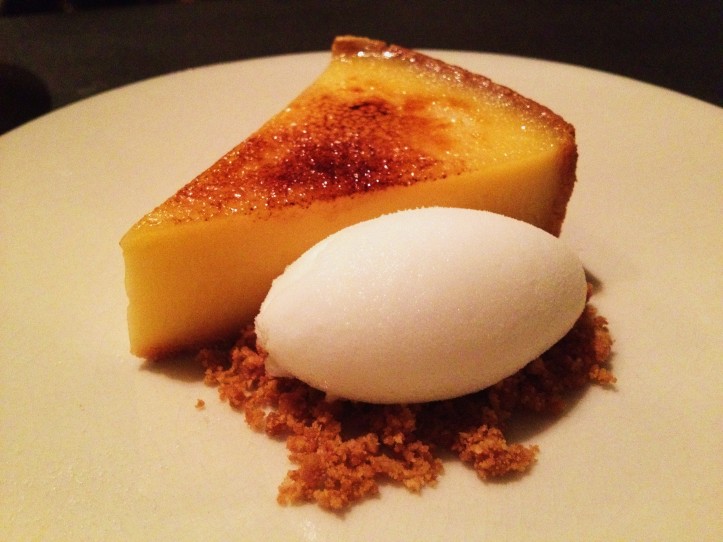 Some dessert thing that is delicious and memorable for under $10 and which a 8, 18, 28, 38, 48, 58, 68, 78, 88, 98 year old person will love? Ha!, most definitely not in Melbourne, you smirk. Well dear readers, try Babka. One part of MoMo & Coco still remembers her first very visit some years ago. A little truant rendezvous taken in between the terribly monotony of administrative law vs property law to explore surrounding northern locales that were a different world. A childlike entrance painted with babushka figures, the aroma of bread, the squash of bodies, a counter of homely cakes. And then, that lemon tart. First, the pastry base. Consistent throughout in thickness, which yielded easily and with a buttery taste. Second, the curd, every adjective of perfection with a brulee-ized surface. $5.50 on our first visit some years back, $7.50 on our most recent. It is hard to beat. No pictures, because some things are worthy of personal rather than vicarious experiences. See our previous review here.