If one views Melbourne as an amoebic organism with the CBD as its rightful nucleus, the Docklands precinct is a pseudopod and South Wharf its newest embryonic offspring. Both are partly formed, yet vibrating with potential life. Edging the midnight black waters of the Yarra River, The Sharing House is arguably the mitochondria of the South Wharf precinct. Consistently beaming bright and loudly buzzing from within  a gleaming glass frontage and posterior, it possesses none of that moody black or grunge disposition favoured by far too many Melbourne restaurants of late. Instead, between a partly-opened kitchen and a distracting Lego-brick bar, a large space is bathed in striking natural light during the day or bright downlights at night. Friends and couples, students and corporates, and the odd senior citizen and the toddler make up The Sharing House’s inter-generational dining crowd.

MoMo & Coco visited twice, on both occasions for an after-work dinner. The eating-style of The Sharing House may be found in its name — small-plate, shared plates. Reflecting a Modern Australian-European sensibility, they were listed in a menu clearly designed by an individual of an untidy mind. With no logical sequencing, whether by price nor size, it was a detracting annoyance. We started with the curious Rabbit & Cauliflower Popcorn ($12) that arrived in a paper bag hugging a fistful of non-greasy nuggets. It was the personification of The Sharing House, lots of fun but…

Next were two mini-Pizzas, a porcini and thyme ($13) and a jamon & mozzarella ($12), good but…small. For that price, we would recommend you bypass it for a more generously-proportioned one at Ladro, I Carusi or +39. This was followed by an assortment of pretty, painterly Salads ($8-$13), and a Duck l’orange ($24), tender with contrasting texture from potatoes, but.. suffocating under a very sweet essence. The highlight of the savouries was the Ocean trout gravlax ($12), vibrant in appearance and flavour, thin slivers of trout embellished with beads of apple and dots of mustard creme fraiche. It qualified as one of our favourite savoury dishes of the year.

The Sharing House offered 6 types of desserts, of which we bypassed the sampling rack of miniature ice cream cones and a selection of so-called “afternoon tea” tidbits. The two desserts which will guarantee our return to The Sharing House, we shall detail first here. The first irresistible is the “Chocolate Delice” ($12), a log of milk chocolate mousse intermingling with a sweep of caramel and set on a base of pop rocks that follow that theme of playful novelty. It came partnered with a dollop of plain ice cream. Alongside a pop rock dessert at Henry & The Fox, MoMo & Coco are inclined to speculate a pop-rock dessert trend. 😛

The second irresistible from The Sharing House which MoMo & Coco loved was the “Chocolate Jaffa Fondant” ($14), a splendid carnival of sugar and colour. Four well-formed mini chocolate fondants danced between squares of fruity jubes and wheels of citrus. A dessert to make anyone smile.

Less successful were two other desserts that we sampled. The deconstructed “Treacle Tart” ($12) was more crumbed cake cubes than tart, of which the stubs were dry in texture and masked in flavour, crowned with discs of something sweet and dabbling swoops of cream. Just plain sugar really.

Similarly, the “Sticky Date” ($14) came presented as a swiss roll filled with date puree. It was again, imbued with dryness and a bare murmur of flavour. The sole positive aspect was the pedro ximinez ice cream. 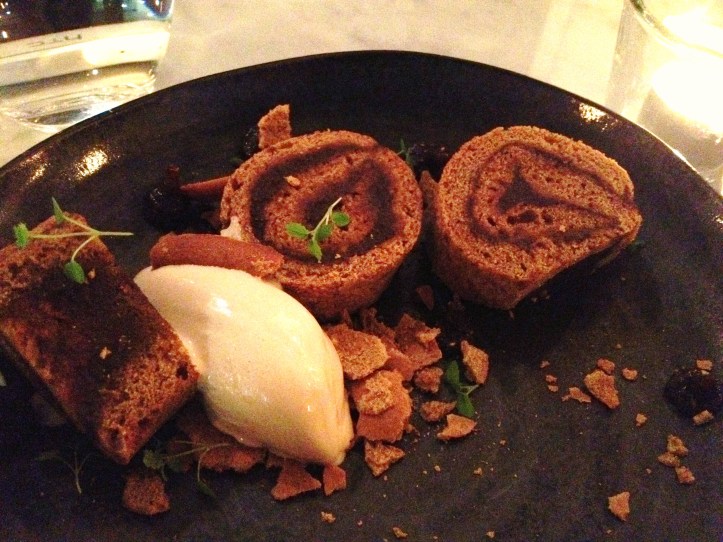 Long-time readers of this dessert blog will recognise that we have very exacting expectations of restaurant service. Over two visits to The Sharing House however, there were no technical faults to note. Can it be, you might ask? Partly yes. The staff were clearly well-organised, there was a designated waiter per table. Our designated water promptly took orders, promptly delivered orders with succinct explanations, promptly refilled wine and water glasses, never hurried us out and on, only delivered the bill when summoned to do so. It sounds simple, The Sharing House did it. We wonder why other Melbourne restaurants seem unable to execute as smoothly. That said, it would have been nice to be farewelled with as bright a smile as when we were greeted…after all, we did just pay.

How does a book become a classic? Is it because of the author? No, no author of an enduring work relies on their perceived fame. Celebrity is transient, hype is illusory. The final version that hits the bookstands is not the author’s product alone. Yes, the author gives expression to his idea by crafting a strong plot, well-developed characters, a clear and lyrical prose. But it is the editor who gives the book the final polish, cutting this out, chopping that away. An editor with a keen eye is what The Sharing House needs. Re-organise that cluttered menu. Excise those average dishes, especially those desserts. Show us a good ending. An impersonal Kevin-Rudd look-alike Lego man that came with the bill summed up The Sharing House — plasticised playful novelty. MoMo & Coco like The Sharing House, but we really ought to have loved it. It has got the backbone of a splendid, versatile venue and offers a generally high standard of service. For want of a better analogy, the food offerings however mirrors the Harry Potter book series. Evidently popular, initially interesting, increasingly of a meandering character, finishing unfinished. Playful novelty that leaves no lasting impression.