Like a Frenchman who had floundered his fortune in the Eurozone crisis, Bistro Guillaume stays true to its name. But we miss the bourgeois Guillaume.

Southbank has long been dominated by bleary-eyed clubbers and light-fingered gamblers, spotted with a handful of extrovertedly over-priced glitzy restaurants catering for those who had the requisite bling-bling and deep pockets to frequent Crown Casino’s Mahogany Room. That shadow still lingers, but a wave of more refined sophistication increasingly laps at the Yarra River’s southern banks. Relocated, renovated, refurbished, Bistro Guillaume re-opened early 2011 as a Frenchman who had floundered his fortune in the Eurozone crisis, downgrading from hedonistic, bourgeois luxury to strictly middle-class rusticity. Mirroring that of an overwhelming number of French restaurants in Melbourne, Bistro Guillaume is fitted out as a quintessential French bistro — all dark bentwood chairs, dark tables, dark cabinet, daily specials scrawled with chalk on a blackboard and a long cellar bar. The one distinguishing aspect are the large lettuce-shaped fabric lighting, clustering like meringue clouds here and there.

MoMo & Coco visited Bistro Guillaume twice, both for leisurely lunch times. Doubling as a bright green placemat, its traditional 3-course a la carte menu skims across the mainstays of a French bistro as one follows the typical “entree, salads, mains, side dishes, dessert” narration. The onion soup is there, as is the charcuterie board, the steak tartare, the salad nicoise, the steak frites, the duck confit, the occasionally-available bouillabaisse and parmentier. It’s all there, and that’s really all there is.

Over two visits, MoMo & Coco have had the opportunity to sample the astringent lush green pot that made up the Watercress Salad ($20) with teeny scatterings of roquefort cheese, far better as a shared side dish we think then as an individual’s meal. Slightly better but still not fabulous, a slab of Pork Belly ($32) perched on a black bed of lentils that failed to express a crispy seared top fat layer. We would recommend the succulent, rich Duck Leg Confit ($33) and the Half Roasted Chicken ($36), though the latter’s pricing still irks us when we note the cost of a supermarket-bought or home-made whole roast chicken is a third of that. Australian restaurant prices are certainly some of the most exorbitant that we have experienced even in comparison to similar high-end dining in UK, US and East Asia. Sigh…

Unlike the irresistible encyclopaedic dessert menu of one of our favourite French restaurants (A La Bouffe), desserts at Bistro Guillaume number just four. MoMo & Coco have sampled all, but in accordance to our blog philosophy, we will only feature the two that we love here. Take our advice and bypass the Creme Brulee because while it’s fine, it’s rather common, and also, the Tarte Tatin whose pastry base was strangely, wrongly soggy on both of our visits to Bistro Guillaume. Order instead the “Raspberry Macaron” ($18) because it’s different and because it’s all sweet and tart sugary loveliness. Drawing inspiration from a Laduree patisserie creation that we have also had the pleasure of sampling long time ago, two thin discs of pink meringue sandwiched a tangy raspberry cream embedded with jewels of red plump berries. This pink island in turn sat on a ruby pool of berry coulis that was properly just-syrupy and robustly flavoured. Guaranteed to sugar-up your day. 🙂 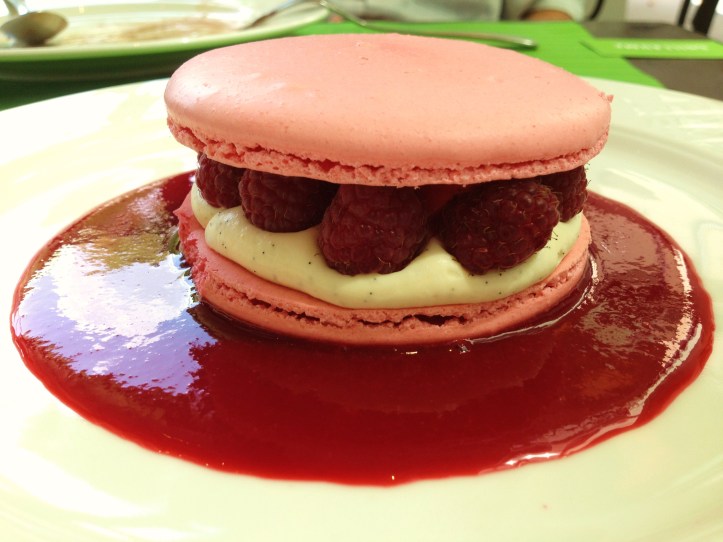 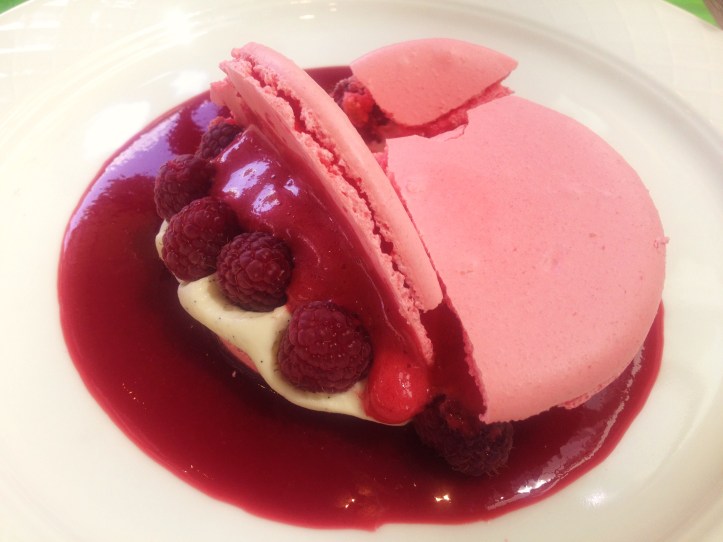 For those who prefer less sugar, more rich desserts, the way to go are the “Profiteroles” ($16), and although our waiter did not mention it, we would recommend you share this dessert. A jug of molten chocolate sauce was theatrically poured over three small mountains of profiteroles that had forfeited the traditional custard filling for a rich vanilla bean ice cream centre. MoMo & Coco do love custard profiteroles, but these were good too. Deliciously decadent. 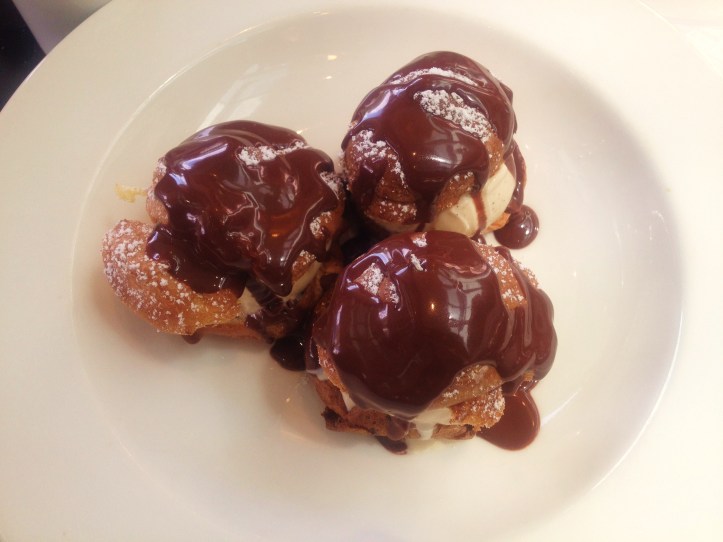 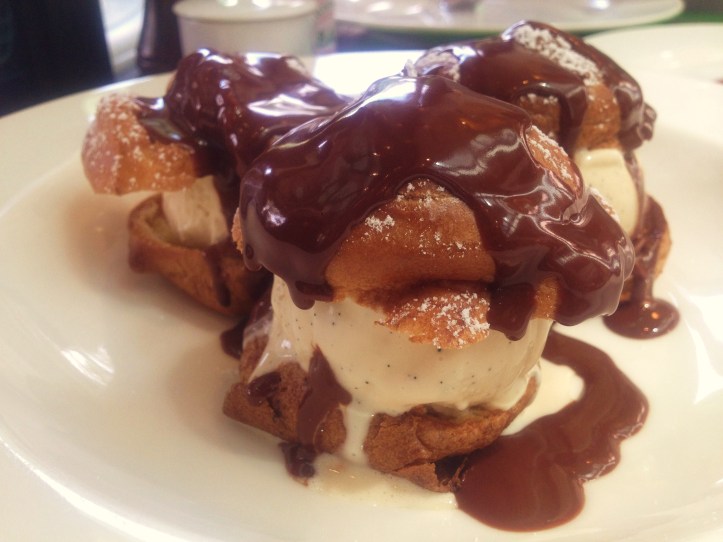 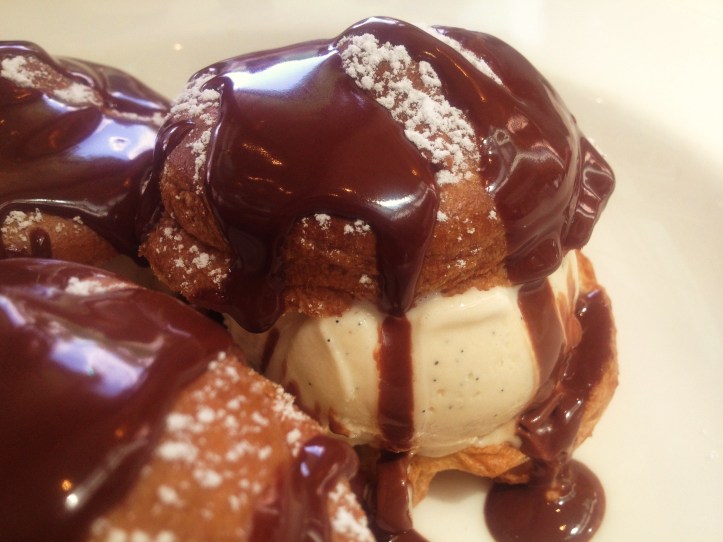 Service at Bistro Guillaume is polite, attentive but rather minimal. We are not expecting silver service, but they do not even wipe down the tables even when breaking the overly crusty bread had resulted in a very visible messy crumb explosion on the first of our two visits. We don’t like the action of turning over the placemats between courses either. It doesn’t change the presence of that crumb mess on the table, and if anything, it means that some of those crumbs falls on our dress or suits. Thank you, but no thank you.

Bistro Guillaume stays true to its name — it’s a bistro, nothing more and nothing less. Attentive but rather minimal service; strictly pared-backed furnishings; unpretentious, profoundly down-to-earth food with no tampering about with classical Frenchness at all, except maybe slightly with two of the desserts documented in this blog post. MoMo & Coco love the new Bistro Guillaume especially for a lazy weekend or leisurely business lunch, and the option of dining on the outdoor terrace is perfect for the breezy spring or warm summer. But we can’t see ourselves here at dinner, for special occasions, and really aside from its pretty location, there really isn’t all that much to distinguish it from the countless other French bistros in Melbourne that offer similar food, ambience and service…albeit at a lower price bracket. Hence, while we like it, we don’t particularly love the new Bistro Guillaume. Indeed, we miss the luxurious experience that one would have had at the old Bistro Guillaume. It’s curious that though Sydney is grown-up enough for a fine Guillaume, the belief is that Melbourne is not. A pity indeed.